May Awards for Rochester

Today in the next part of the series I will be naming a Pitcher of the month and Hitter of the Month for the Rochester Red Wings. 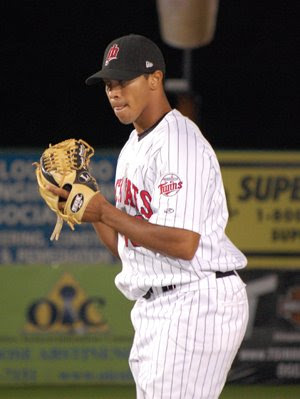 I am sure there will be some discussion on these players so let me know what you think. Tommorrow I will continue the Awards as I will do the New Britain Rockcats.

Posted by Travis Aune at 6:04 PM No comments:

Q & A with Steve Blevins 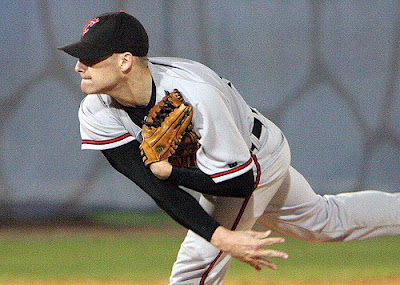 In a very big day for Travis Talks I am proud to announce that I have secured my very first Q&A on this website. I think you are all going to enjoy learning about this guy because he is a very nice guy and I want to thank Steve again for doing this I really appreciate it. In case you have not heard of Steve Blevins before trust me you will he is a very good relief pitcher for the Beloit Snappers. The Twins obtained him in the 21st round of the 2008 draft out of Marshall University. I hope you all enjoy and Im hoping it will be the first of many Q&A's on Travis Talks so if you have any questions or comments you can either leave it in the comment box or email me at travis_aune@yahoo.com.


Travis Talks: Growing up in Louisa, Kentucky did you play alot of sports or was it mainly baseball?

Steve Blevins: I have played baseball since I was 6 years old. I also played basketball all the way throughout high school, and football and tennis in middle school.

Travis Talks: Tell me about your High School Career?

Steve Blevins: In Kentucky you can play high school sports while you are in middle school, and I was fortunate enough to play varsity baseball as an eighth grader. Probably the best part of that was getting to play with my older brother Adam who was a senior that year. I played 3rd and shortstop when I wasn't pitching. I played for Hall of Fame Coach Randy Keeton which helped prepare me greatly for when it was time to move on to college.

Travis Talks: Were you highly recruited out of high school?

Steve Blevins: Probably not as highly as some guys, but I had around 10 or so offers. I was pleased with the offers I had and was happy when I signed with the University of Cincinnati.

Travis Talks: You Started your college career at University of Cincinnati how big of an adjustment was that for you from hight school?

Steve Blevins: It was a pretty big change. I would say just the overall speed of the game and the fact that everyone was good were probably the biggest things. In high school the teams I played would have two or three good players, whereas in college most teams were full of them.

Travis Talks: Before your junior year you transferred to Marshall how hard of a transition was that after spending 2 years at Cincinnati?

Steve Blevins: Actually it was pretty easy. I enjoyed my two years at UC, but when I chose to transfer I knew that Marshall would be a good fit for me. It was nice to have a fresh start with a new team and in a new conference. Pitching coach, Tim Adkins, made the transition very easy.

Travis Talks: When the Twins drafted you in the 21st round were you surprised had they been talking to you?

Steve Blevins: I wasn't really surprised because I had talked to the Twins quite a bit. I had lunch with Twins scout, Jeremy Booth, the week of the draft so I kind of figured there was a chance.

Travis Talks: You started in college mostly and now are relieving for the Twins how did that transpire?

Steve Blevins: Basically you show up and do whatever is ask of you. I had never relieved before was it was a change, but it was been a good one and something that I have enjoyed.

Travis Talks: You started your professional career with the GCL Twins for 8 games what was that like for you?

Steve Blevins: It was different from what I was used to for sure. I was used to playing night games in college, and then I went straight to the GCL and we were playing games at noon everyday. We also rarely had over 5 or so fans, so that was definetly something I wasn't used to.But it was a good experience. The team was made up of a lot of younger players so that was different as well.

Travis Talks: You then moved up to E-town how was that different then pitching for the GCL Twins?

Steve Blevins: Once again in E-town we played night games and I was back around guys that were closer to my age, so that was nice. We had a team full of good guys and good players, so finishing out the summer there and winning the Appy League made it a lot of fun.

Travis Talks: This year you moved up to the Beloit Snappers of the Midwest League did you have to make any adjustments to the little colder weather in the Spring?

Steve Blevins: Being from Kentucky and playing my college ball in Ohio and West Virginia, I played a lot of baseball in the snow, so the cold in general wasn't anything new to me. But I had always been a starter in the cold, being in the bullpen for 5 or 6 innings and then pitching was a big adjustment. There aren't many ways to stay warm when your just sitting around in the cold.

Travis Talks: What would you say is your bread and butter pitch when you need a strikeout?

Steve Blevins: I would say my slider.

Travis Talks: For those who don't know what is a regular game day for a minor league pitcher like?

Steve Blevins: We usually show up to the field 3 hours or so before game time. We then go out and do our throwing program and conditioning. From there we shag during batting practice or possibly do a fundamental. Then we relax for an hour or so before we head out for the game.

Travis Talks: How hard of an adjustment has it been this year from going from short season to now the Full season?

Steve Blevins: The biggest part is playing almost every single day. I think we get an off day every 25 days or so. It's just June now so I'd say come August or September, the grind of a long season will hit.

Travis Talks: What do you think you need to work on the most as you continue your pro career?

Steve Blevins: I would say I need to work on my secondary pitches the most and also my control. There are so many different areas when it comes to pitching and with time and experience, all of those can be improved.

Travis Talks: What would you say is the best part about being a professional player?

Steve Blevins: For me it's knowing that I'm getting the chance to be what I have wanted to be since I was 5 years old. I think it's cool that we are role models for kids who want to be just like us when they grow up.

Travis Talks: Growing up did you have any favorite teams?

Steve Blevins: I was a Reds fan growing up.

Travis Talks: Growing up was there a player you really admired?

Again I would like to thank Steve Blevins for taking the time to do this Q&A and best of luck on the rest of the season.

Posted by Travis Aune at 7:04 AM No comments: