Twins draft RHP Kyle Gibson in first round of draft 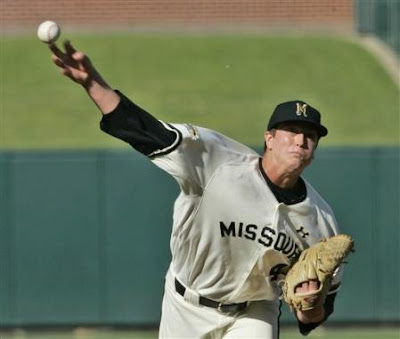 The Twins have selected RHP Kyle Gibson in the first round of the Draft. Gibson was highly thought of, but he lost some velocity because of a strained forearm. He was rated as the 4th best prospect coming into the draft but many teams were scared off thinking he might need Tommy John Surgery so he lasted until pick 22. The Twins obviously must believe it is a minor injury or you would not risk a first round pick on someone who could never pitch. The belief is that he will miss 4-6 weeks and probably will not debut until next spring in extended spring training. I think if it is just a strained forearm then the Twins got the steal of the draft. However, if he needs Tommy John surgery the Twins just made a bad pick. Only time will tell.

UPDATE: The Twins selected left handed pitcher Matt Bashore out of the University of Indiana with their supplemental first round pick. They received the pick when the St. Louis Cardinals signed former Twins reliever Dennys Reyes. Bashore has good size being 6'3 200 for a Lefty is good. He was clocked in the mid 90's, but works mainly in the low 90's with a good splitter. If you are left handed you have a chance to be good. He also has had arm problems so there is a red flag on him as well. Time will tell if the Twins were right in taking these chances.

Posted by Travis Aune at 5:36 PM No comments:

Posted by Travis Aune at 9:16 AM No comments: