Today I will be continuing my prospect list as we move into the top 5 prospects. Today I will bring prospect number 5 in the Twins organization. Let me know what you think either by emailing me at travis_aune@yahoo.com or leaving a comment in the comment box. 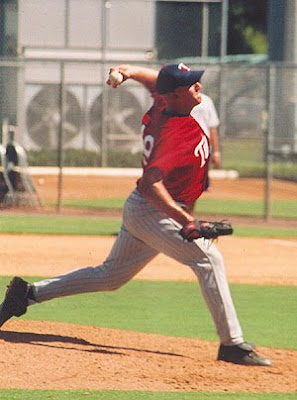 Posted by Travis Aune at 8:33 AM No comments:

Posted by Travis Aune at 5:05 AM No comments:

I would like to thank Seth over at Sethspeaks.net for breaking the story that Danny Valencia has been promoted to AAA Rochester. Valencia had been in a rough slump but the last 6 games he is 10-24 to come out of it and with some injuries in Rochester he will be a good guy to come in and play 3rd for them. I hope expectations are not out of his world in Rochester because Danny has a history of needing time to adjust to the new league. Last year he struggled at New Britain for a while until he adjusted before taking off and I expect the same thing at Rochester. When he gets his 50-60 at bats then look to see the real Danny Valencia and don't pay attention to his numbers before then while he adjusts. But it is great news for Danny and Twins fans all over the world because Danny is that good. For us Twins fans that have been hoping Danny will open up Target Field next season as the Twins 3rd baseman this is another sign that it is possible. Here is hoping Danny does very well at Rochester.

Another big thank you to Seth for breaking the news that Danny Berg will take Valencia's spot with New Britain as he got promoted to New Britain. Danny is a very solid player that can play just about anywhere. I know he only hit .232 with Fort Myers, but he is so versatile that he will be good at New Britain. The interesting question is who plays 3rd for New Britain on a regular basis now. Their only 2 choices that are on the roster right now are Berg and Toby Gardenhire and both of them are better suited for part time roles so it should be interesting to see if they split the position for the rest of the year.

Posted by Travis Aune at 4:55 AM No comments: