Tonight, I will be continuing my prospect list with prospect #9 as I keep counting it down until finally picking the top prospect in the Twins organization. 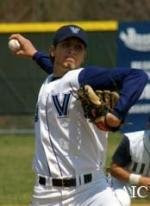 Posted by Travis Aune at 3:42 PM No comments: