I am back with another Twins minor league system Q&A and had the pleasure to have one with top pitching prospect Tyler Robertson. In my recently completed Travis Talks top 50 prospect list I had Tyler listed at #5 so obviously this is a big interview and am thrilled to death that Tyler was gracious enough to answer my questions. I hope you all enjoy and keep coming back to my site because I am working on some other ones as well. Also I welcome you to look back in my archive at the first Q&A I did with Beloit Snapper relief pitcher Steve Blevins who I had rated at #35 on my list. So enjoy and again leave your comments in the box or send me an email to let me know what you thought of the interview or who you would like me to interview next at travis_aune@yahoo.com. 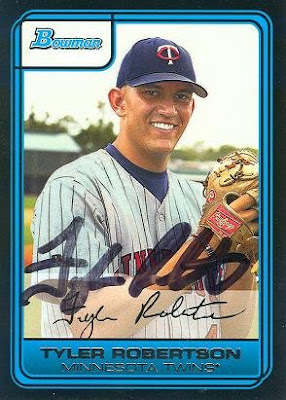 Travis Talks: Tyler, growing up in California who was your favorite baseball team?

Tyler Robertson: I Never Really Had A Favorite Baseball Team, I Was More In To Individual Players. If I Had To Pick One Growing Up Though, It Was Probably The Cleveland Indian. My Dad Was Working With Them At The Time.

Travis Talks: In high school did you just play baseball or were there other sports you played. If so what sports?

Tyler Robertson: I Played Baseball, Football, and Basketball. Loved Football. Had Offers To Play College Football But I Like Baseball More And Its Always What I Have Wanted To Do.

Travis Talks: Tell me about your high school career?

Tyler Robertson: Played 4 Years Varsity, Tried Out For The Team As A Freshman and Made It. Was A High School Underclassman All American As A Soph and Jr. and Was The California State Player Of The Year In 2006. Pitched and Played 1st Base.

Travis Talks: You were drafted in the 3rd round in 2006 is that where you were expected to be drafted?

Tyler Robertson: I Was Told Between The 2nd and 4th Round

Travis Talks: Had you been talking to the Twins or were you surprised that they drafted you?

Tyler Robertson: The Twins Scout Who Signed Me (Kevin Bootay) Did An Awesome Job, He Only Missed Like 2 Games My Whole Senior Year. I Knew They Were Interested But Its Hard To Tell How Serious. He Was Honest With Me And Told Me He Liked Me A Lot.

Travis Talks: With your Dad being a former Twins scout did you go to alot of games?

Tyler Robertson: He Worked For The Twins A Long Time Ago. I Think Before I Was Born. So I Didnt Go To Twins Games But I Use To Go To Games With Him All The Time Growing Up And I Would Watch While He Scouted.

Travis Talks: After signing with the Twins you went to GCL how did you feel about that season?

Tyler Robertson: The GCL Was Good. It Was Nice To Get Out Here And See What Pro Ball Was Like And Get My Feet Wet

Travis Talks: What kind of a pitcher would you consider yourself?

Tyler Robertson: I Just Compete Everytime I Am Out There And Try To Give My Team A Chance To Win Everytime I Pitch

Travis Talks: Being a California guy what was it like spending the year in Beloit where it can be cold?

Tyler Robertson: I Was Called Up To Beloit About A Month Into The Season So I Missed The Real Cold Stuff. I Am From Northern California Though And It Gets Cold Up There In The Winter So I have Played and Workout In Cold Weather Before.

Travis Talks: After Spending the 2007 at Fort Myers and having a good year were you surprised you started last year in Fort Myers again.

Tyler Robertson: A Little Bit, I Missed About Half Of The Season With Tendonitis Tho So I Figured They Would Want To Make Sure I Was Healthy And Go Slow.

Travis Talks: Halfway through last season you suffered an injury what was the injury?

Tyler Robertson: Biceps Tendonitis. I Am Just Real Happy It Was Nothing Too Serious.

Tyler Robertson: Basically My Rehab Was Rest, Its The Only Way Tendonitis Will Go Away, So Rehab Was Actually Kind Of Boring.

Travis Talks:Was it hard to get confidence back in your stuff?

Tyler Robertson: Not Really. As Soon As It Was Healthy Again And I Didnt Feel Anything Unusual I Just Treated It Like Nothing Ever Happened. Although I Do Know That It Takes A Long Time To Get FULL Strength Back From Any Arm Injury No Matter How Small. So I Am Still Working On That

Travis Talks: For someone that doesn't know what is a usual day like when it is your turn to pitch?

Tyler Robertson: I Try And Keep The Days I Pitch Just Like Every Other Normal Day. Get To The Park Play Cards With The Guys And When Its Time To Get Ready For The Game That When I Will Start Thinking About What I Have To Do That Night Or Day.

Travis Talks: What things do you have to work on the most as you progress through the system?

Tyler Robertson: Just Keep Building Arm Strength and Staying Healthy. And Command Of All My Pitches.

Travis Talks: As a member of the Twins organization do you pay attention to the teams ahead of you or just focus on yourself.

Tyler Robertson: Just Try To Focus On Myself And Getting Better Each Day. You Cant Control What Goes On Ahead Of You

Travis Talks: What will it be like pitching in Target Field?

Tyler Robertson: Hopefully Not As Cold As I Imagine It Could Be

Travis Talks: What was it like when you received your first professional baseball paycheck?

Tyler Robertson: Pretty Nice Considering It Was My First Paycheck Ever

Travis Talks: What are your expectations for the second half?

Tyler Robertson: Just Keep Trying To Get Better Each And Every Start. If I Can Do That, Good Things Will Happen.

I would like to thank Tyler Robertson again for answering my questions I really appreciate it.
Posted by Travis Aune at 11:02 AM